Hope and frustration: For families looking to adopt newborns, the journey isn’t easy 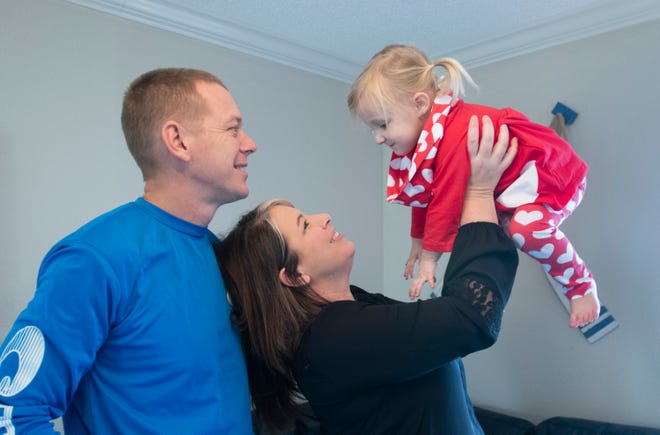 Brooke Penton is a typical 2-year-old: She’s shy when she meets new people, her favorite color is pink, she is constantly on the move and she absolutely adores her mom and dad.

On a cloudy Friday at her home on the water in Gulf Breeze, she sat in her mom Melissa’s lap before wiggling over onto her dad Rusty’s lap. She then nose-dived into the couch pillows and ran off to get one of her stuffed animals.

Brooke, Melissa, and Rusty Penton are a normal suburban family with a special family story: Melissa and Rusty adopted Brooke as a newborn and have dedicated their lives to sharing their adoption story and encouraging others to adopt as well. They regularly keep in touch with Brooke’s birth mom, who the toddler refers to as her “belly mom.”

“Brooke’s birth mom is really the hero in all of this,” Rusty said. “I can’t reiterate that enough. She was young, and she knew she loved Brooke, so for her, it was just in Brooke’s best interest to find an adoptive family for her.”

The Pentons are one of the thousands of U.S. families who have an adoptive child — at least one out of every 25 families with children have an adopted child, according to the U.S. Census Bureau. But adoption attorneys and groups say that over the past several years, adoptions — especially of newborns — have been increasingly difficult to facilitate.

Stephanie White, one of Northwest Florida’s leading family law and adoption attorneys, said newborn adoptions have always been one of the more difficult types of adoptions (compared to adopting out of foster care) due to a lack of willing birth mothers and stigma around the adoption process. But newborn adoptions have been particularly difficult since the start of the pandemic, she said.

“The difficulty is not anything new, but my fellow state adoption attorneys and I were talking the other day about how the number of birth moms are down across the state,” she said. “The pandemic has definitely caused birth rates, particularly unplanned pregnancies, to decrease. People aren’t going out and doing things, they’re not going out and meeting up with boys and girls and doing what they used to be doing, they’re being more careful. I think that has really caused the birth rates to go down which, in turn, affects adoptions.”

While the state of Florida hasn’t released live birth rate data for the entire 2020 year, data from January to September 2020 shows that 156,313 babies were born in Florida during that time frame. In all of 2019, a total of 219,493 births took place in the state.

And experts who predicted a “baby boom” due to pandemic-related lockdowns across the United States now say that there has actually been a “baby bust,” with researchers suggesting there will be 300,000 fewer births in 2021.

For many families who exclusively want to adopt a newborn as opposed to a grown child in foster care, finding a birth mother can be a difficult task. White works to unite both birth mothers and potential adoptive families, a task that has become increasingly difficult over the past several years.

A decision made ‘out of love’

The Pentons’ newborn adoption story is an anomaly, they admit.

Rusty and Melissa were married in 2009 and spent most of the next decade living a relatively carefree, childless life. They lived at the beach, Rusty worked at his dad’s auto shop and Melissa worked at Marcus Point Baptist Church’s thrift shop.

They tried to conceive a child on their own but were never able to get pregnant. They never thought about adoption until someone at their church approached them one day in 2017 and asked bluntly if they’d like a newborn baby.

“I mentioned it to Melissa as we were driving home,” Rusty said.

“He said, ‘Karen wants to know if we want a baby,’ and I said, ‘What?’” Melissa recalled. “She said she had a friend who is pregnant and looking for adoption and she just straight up asked Rusty in the church lobby.”

A young woman was pregnant with her third child and didn’t think she could care for another newborn, Melissa said. The Pentons met with the woman on an icy January day in Pensacola.

“We weren’t actively seeking a baby, they sought us out,” Melissa said. “We ended up meeting with the birth mom again a second time that week, and we told her that we would move forward as long as God opened up all the doors.”

After a lot of praying and conversations, the Pentons decided it was in their heart to adopt the woman’s baby. They sought the help of White, who expedited the adoption process since the birth mother was already about seven months pregnant. In March  2018, little Chloe Brooke Penton was born, and the Pentons took her home after two days in the hospital.

“We had seven weeks from the time we met her birth mom initially to the day that she was born,” Melissa said. “The home study was done the Friday that she was born, so the hospital let us stay with her. We fed her her first bottle, gave her clothes and then we were able to take her home from the hospital. Then we just filed with the judge, and everything was said and done.”

Brooke will turn 3 next month, and the Pentons know that sooner rather than later she’ll start asking serious questions about her “belly mommy” and want to know her story.

Melissa and Rusty said they meet with Brooke’s birth mom four or five times a year, and plan on being completely open with Brooke about her adoption story as she gets older.

“We want Brooke to know that the decision (to place her for adoption) was made out of love,” Melissa said. “There wasn’t any other reason. (Her birth mom) loved her so much that she wanted her to have the best life, and she didn’t feel like she could emotionally or physically do it. She has two other kids, and she’s a great mom. We have a great relationship with her and we view her as family.”

White said the Pentons are a story of hope, because newborn adoptions are particularly hard, even though they are possible.

“With unplanned pregnancies, most mothers when they find out they’re pregnant are totally shocked and they either choose to parent the child, let a family member parent the child, or they choose abortion,” she said. “Most don’t know about adoption, they don’t know really what it is. They’ve heard the word but they don’t actually know what it means. You don’t talk about adoption or people who have been adopted, and they don’t know about other people who have chosen adoption.”

Rusty said he hopes stories like theirs will inspire people to consider adoption as an option.

“It seems like the tide has changed quite a bit from what it used to be,” he said. “There was a stigma, it was closed books and you didn’t tell anyone, and then the kid finds out when they’re 20 years old or something. It seems that people have learned that it’s a better option to be open from the beginning, and I’m just incredible thankful to have a relationship with Brooke’s birth mom.”

Newborns in the foster care system

Not every adoption story, of course, is as smooth as it was for the Pentons.

Shelley Brown lives in Molino just north of Pensacola and has seven kids between the ages of 4 and 17. Two of them are biological, and the other five she adopted out of foster care.

Brown also has two foster children at the moment, one of whom is just a few months old. She said she sees newborn babies come through the foster care system often, and parents who want newborn adoptions often don’t realize that the foster system is an option for them.

“I know people that have been on an adoption waiting list for years, and I’m like, you ought to do it through the foster system. There are so many kiddos out there,” Brown said. “Right now, for instance, this little boy I’ve got is two months old, I brought him home from the hospital at five days old. … I don’t want any more children, but he’s beautiful, and someone would love this baby forever.”

Brown said most of the newborn babies she’s gotten through foster care were born addicted to drugs, and so the parents have to get clean if they want to get their children back. The ultimate goal of fostering, of course, is reunification with the parents, but when that isn’t a possibility for whatever reason, the baby becomes available for adoption.

There are limitations and issues with the foster care system, Brown admits. She said her 2-month-old foster son has seven siblings across the country, and judges will always try and get siblings to be adopted together, even if babies like her 2-month-old have never met their siblings. So Brown could raise the baby for the next few years and then have him taken away if another family decides they want to adopt him along with his other siblings.

“If I was looking to adopt, and I had this perfect little boy right now, then I, as a foster mom, would be heartbroken, because the rules of engagement are they check with everybody else under the sun,” she said. “Luckily, we are not looking to keep him.”

White also works with foster families and does several foster adoptions. In fact, she had two foster-to-adopt cases in court Friday.

“It can be a family member, relative, or the foster parent, and that’s a wonderful way to adopt,” she said. “A lot of times, my clients who want to do a newborn adoption don’t want to do a foster care adoption because they want a newborn, and the goal of foster care is to reunify. So as a foster parent, that’s your job, to help reunite the child with their biological parent, and sometimes that doesn’t work out.”

‘A chance at life’

Ultimately, White hopes that the stigmas surrounding adoption will continue to melt away, and that birth mothers will realize that adoptions aren’t as scary and closed-door as they once were.

They can, of course, be closed if that’s what the birth mother wants, and sometimes it’s necessary.

“Adopting used to be a secretive, shameful thing, and you didn’t know who was adopting the baby. It was all secretive. You didn’t want to tell that child,” White said. “In the past 15 years or so, that started changing. Now it’s a story of redemption, it’s a story of hope. Most of these parents have been trying for years and years to get pregnant, but have had miscarriage after miscarriage, loss after loss. And if I’m finally able to connect them with a mom who’s struggling with an unplanned pregnancy, it turns that story of loss into a story of hope.”

White said she’s also working to reduce the feelings of shame and unworthiness that come with placing a child for adoption, even if it’s the best for all involved.

“It takes a really strong woman to place her child for adoption, and it takes someone who’s really selfless, not selfish,” she said. “They realize there’s something better than they can do for another human being, and that’s to give them a chance at life.” 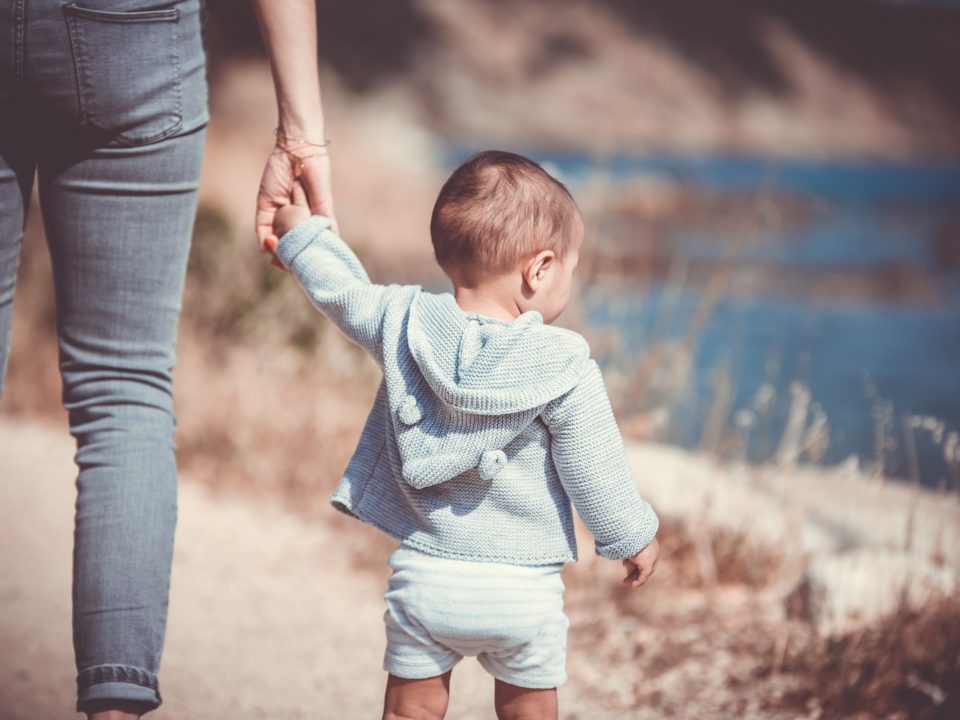 DCF Versus Private Adoption in Florida 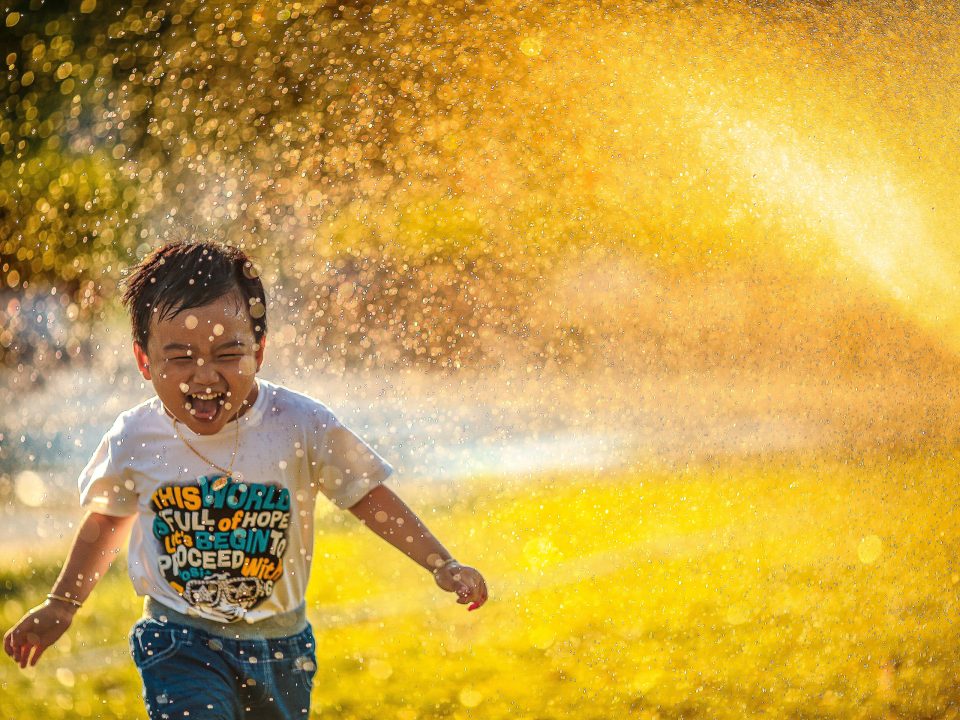 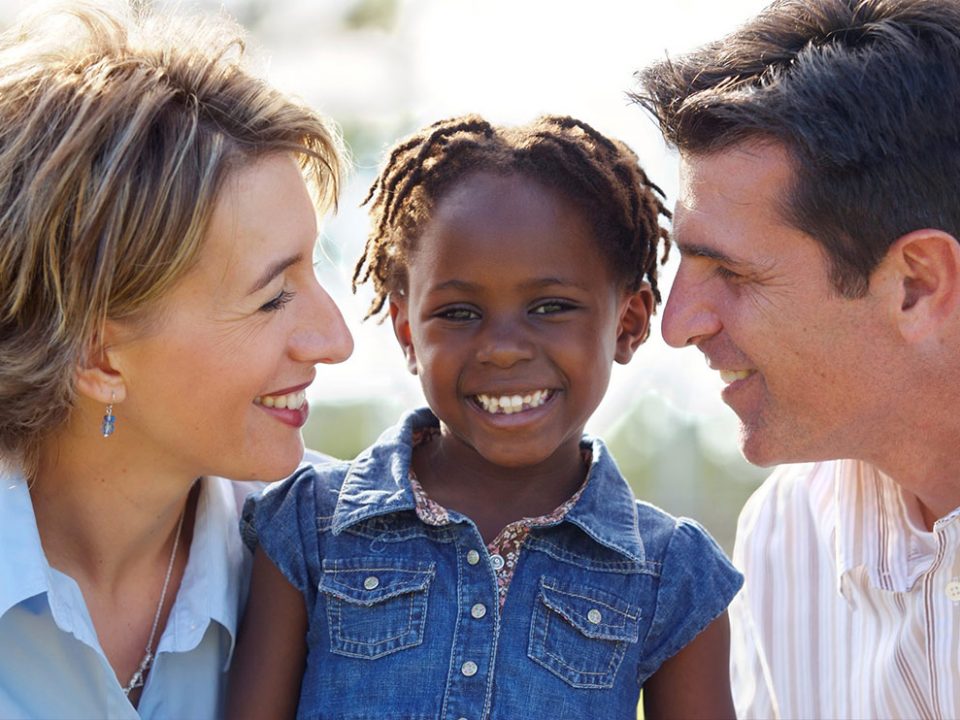 When and How to Tell a Child They Were Adopted